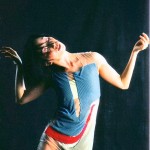 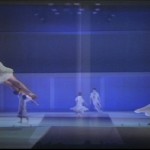 Something Strange In The Air, the literal translation in Cantonese being “craziness in the wind”, is a multi-media dance theatre piece performed by the McMuiMui Dansemble, a local dance company formed by Abby Chan and yeung Wai-mei.

“Craziness” – or the Cantonese homonym of ” craziness” – was used as a frame work for a montage of scenes about contemporary Hong Kong.

With long pink and purple wigs , Chan and Yeung danced holding hairdryers that hung from the ceiling.

Their lyrics covered government intervention in the stock market, health scares, the Snoopy fad, mainland mistresses, mass sackings and a panoramic view of newspaper headlines from the past few months.

Then came a blackout. They panicked, they complained and they bitched about each other. Both dancers were expressive and performed with great commitment.

The second of the two main pieces portrayed how insatiable materialism can drive people insane.

The performance was full of innovative concepts, seasoned with wit, camp humor, sarcasm and, above all, craziness.

Scenes included Chan being bombarded by brand labels projected on to her body, Chan and Yeung dancing in a handstand position with their feet in fluffy shoes and a doll stripped naked by electric fans.

This continued with empty political slogans being juxtaposed with the vacuous ambitions of beauty queens and a home music video.

Then the audience was asked to participate in a lesson in which we were taught both the Chinese characters for “forgetful” and “busy” were made up of two words – ” heart” and ” dead”. The message is when our spirituality dies, what we can do is to keep ourselves busy and forget what is important.

Scene changes were a bit abrupt, more like a variety show than a coherent piece. But McMuiMui was fun and popular with the audience – being self-confessed crazy it was beyond logic anyway.

Dancers Abby Chan and Yeung Wai-Mei pleaded : ” Stand back, fans! Stand back!” seconds after the show began. Then two tough looking menace on stage and pushed back two big electric fans that were blowing at full blast.

Bizarre, witty, but most of all, very funny. That is also how one would describe this well thought out and choreographed dance piece by McMuiMui Dansemble.

This show is part of the All Independent Dance Series jointly presented by the Hong Kong Dance Alliance, City Contemporary Dance Company and the Arts Centre.

The Chinese title for this production means ” the wind continues to blow”, playing on the word “wind”, which sounds the same as the Cantonese word for the “craziness”.

Something Strange in the Air is all about the weird and bizarre happenings in Hong Kong since the handover : bird flu ; red tides; and the Asian economic crisis.

The duo even sang, in Cantonese operatic style (to the nursery rhyme tune of Old MacDonald Had A Farm), a lament to a society on the verge of breakdown: “Here a crack, there a crack, everywhere a crack crack!”

The show is divided into about dozen sketches, each including a dance routine, along a distinct theme – whether social, economic or political.

One sketch had both Chan and Yeung “dancing” while doing handstands – “some-times we have to look at life from another angle” – to convey the need to ask whether the economic downturn need spell only doom and gloom.

In another, sensuous and beautifully choreographed dance, the pair intertwined limbs and glided over one another’s bodies, provoking a consciousness of the modern obsession with physical perfection.

Their cruel satire on the beauty pageant format saw Chan parade around the stage, before gradually descending into a wild frenzy.

More than just a dance show, this was an intelligent and wry critique on Hong Kong people’s senseless pursuit of popular culture and our tendency to panic and crisis. 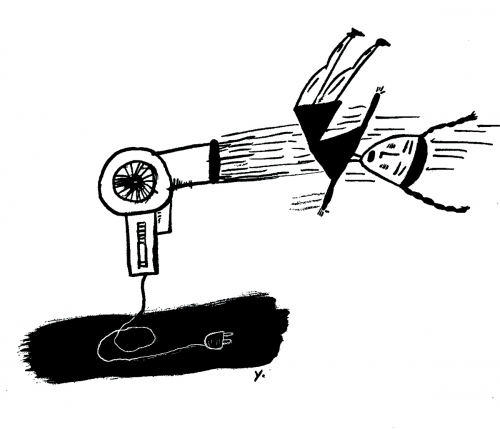 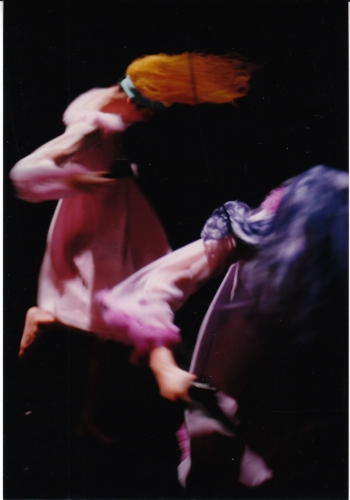 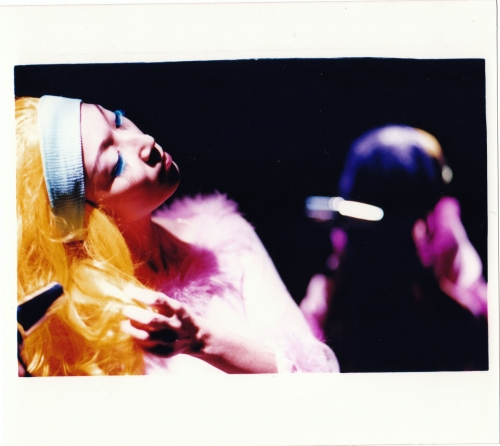 Living up to its title, Siesta – Before Hong Kong’s Return is a modern piece that is short, sweet and focused on Hong Kong’s imminent return to mainland China.

In just under an hour, choreographer Abby Chan Man-Yee lines up seven swift dance acts that focus on several common “97 themes” such as the Westernisation of the territory’s culture under colonial rule and migration.

The Prologue, performed by Chan and partner Yeung Wai-Mei, is an interesting and innovative mishmash of gymnastic leaps and flips, Chinese operatic steps and prototypical dance, which was prominent during the Cultural Revolution.

The Afro-style drumbeat, coupled with a recording of girlish giggles, adds to the aural impact of this routine. This is followed by a funny sketch on why Hong Kong people adopt English first names in addition to their Chinese names.

“Is it because by having an English name they will be more accepted by the English?” Chan asks when playing hide and seek with Yeung. The choreography for this piece is clever in that the two dancers, with one being blindfolded, never touch even they were doing some complicated body movements right next to one another.

In Bon Voyage, “dedicated to our friends who have emigrated”, Yeung scatters a bagful of fortune cookies on the world map, symbolizing the many Hong Kong Chinese now living abroad.

After the show, I picked up one of the cookies that were swept on to my feet. It says: “You will travel to many places .”

The evening performance reaches its climax in The Epilogue when both Chan and Yeung carry a red bomb. There is a collective gasp : will they light it or not?

The concept behind Siesta, which premiered earlier this year in New York, is not particularly original, though Chan’s choreography is beautiful, smooth and visually exciting.

Much though has also been put into the music and the beautiful costumes, designed in part by Yeung Kong-hon. 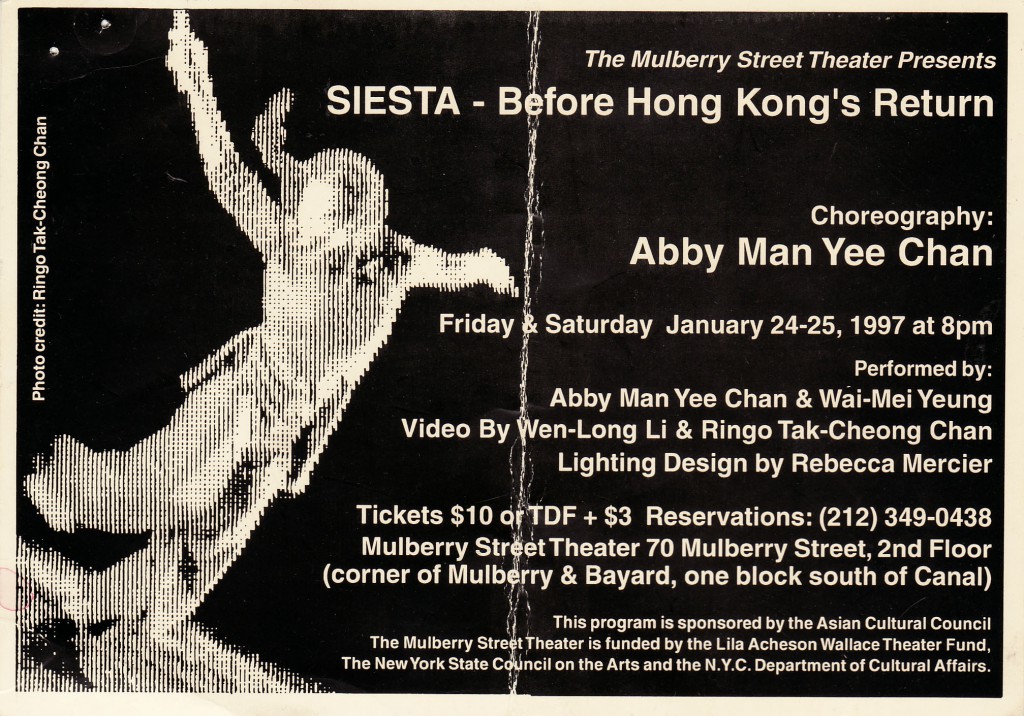 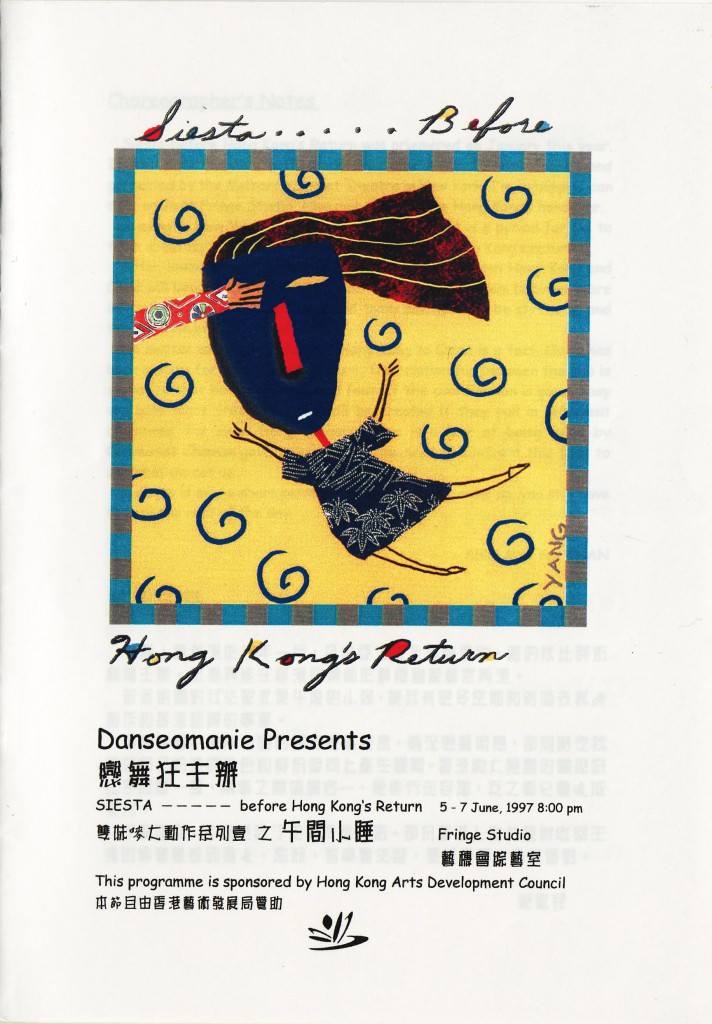